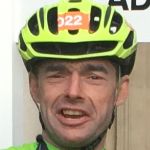 A great challenge and a very worthwhile charity. I had already done four other 24 hr rides prior to this one which were Newcastle to London three times, 2013, 2015 and 2016 as well as London to Lands End in 2014. All were three hundred miles and two were in appalling weather conditions. The first one had constant rain for the first twenty three hours so you can imagine the state of certain parts of my body when I finished and peeled myself off the bike! The last had very strong winds all the way. I have never wanted to get off a bike more!

Very hard physically but great fun if you like to test yourself and you absolutely must put in the training. If you do not do this, you will fail as the terrain is very hard on you. On the upside though I found everybody I met to be really nice and very helpful, full of encouragement.

The beautiful coastline that we rode along on the south coast. Absolutely stunning scenery. Of course finishing it as well and being force fed a bottle of Newcastle Brown Ale by my good lady! Not much forcing required!

What are your top 3 tips for anyone thinking of riding the Trafalgar Way ?

As I said earlier the training has to be done as the climbing in the first couple of hundred miles takes it’s toll on you but keep thinking to yourself that the last 20% of the ride is virtually flat so it does get easier. Keep a few energy bars on you in case you start to flag a bit and there is still some distance to go until the next food stop as they do not take up much space in your pockets or bag but they might just be enough to get you to the next stop. Your GPS will not last twenty four hours so take the charger to plug it in at the longer stops. I also took a power pack for it so I could charge it in my saddle bag if I knew where I was going.

One other thing that I would add is try and do the ride with a friend as getting lost in the middle of the night on your own is not good. I did this during Newcastle to London 24hrs 2016 and added thirty five miles and two and a half hours to the ride! Two heads are better than one and you could also share the gps duties because of the battery life I mentioned earlier.

The main ones are my shorts and gloves as being your main contact points on the bike they take the most punishment from the road so get good ones. After I found the ones that fitted me the best I now will not buy any different ones when they wear out.