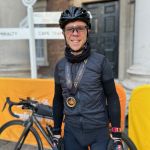 I was looking for something to do, I watched one of the GCN videos with Si Richardson doing an Audax and he said just to sign up. Either he or someone else mentioned the RTTW and it looked like an iconic route and so I signed up for it

A great ride - even immediately afterwards I don’t recall it feeling particularly long or particularly hilly although it was clearly both. Felt like a ride very much in two parts: first Falmouth to Salisbury felt like a “normal” (but long) weekend ride broadly through lovely countryside; second Salisbury to London in the dark felt like a bit of a slog riding in a little bubble of light and watching the Garmin toensure the sub-24 remained on.

A few points stick in the memory. Main one being coming up the hill to see the sea, Chesil Beach and Portland open up in front of me. As a (rock) climber this had multiple motivations and memories and it was a beautiful day at this point and I felt great.

register your interest in our 2023 ride

This website uses cookies to give you the best possible experience. If you continue without changing your settings, we'll assume you're happy to receive our cookies. You can change your cookie settings at any time.