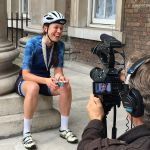 In short, the challenge. This is undoubtedly the furthest distance I have covered in a single ride and the greatest ascension also. Too stubborn to team up, my friend and I approach this as a solo event and to be honest, arriving on the start line didn’t know if I was capable of completing the course. But that’s why we do it isn’t it? It’s the fun, excitement and reward that comes from a challenge - and I was going to give it my best shot!

FUN! I never expected it but it was so much fun and never short of giggles along the way. Yeah you had to earn your weetabix but it was so worth it.

The following day I was asked if I would take part again and my response was that I had done it and so didn’t really need to, yet as little as 2 days in I was already gathering the troops to join me on the start line for 2018!

Oh where do I start ....? One memory I am particularly fond of is riding through the night, just shy of the next feed station. I couldn’t see my Garmin and so had no idea what speed I was doing, I had only the feeling in my legs to go by. I was later told that I was storming along at 20mph ha ha - I was having so much fun!

Another memory I am fond of is being filmed from the media crew van, cycling behind the van, the videographer was sat in the back with the hatch open encouraging me to cycle faster and faster UP HILL to make the shot look good - I couldn’t stop laughing at my efforts to keep up with the van.

The camaraderie has to be mentioned also - the media crew, the event organisers, those serving at the feed stations, and none more so than the fellow riders - everyone was so encouraging and genuinely wanted you to do well - cliché I know but you really felt it.

Talking of feed stations, I told a chap called Tom, who was manning a feed-station mid way through the route that I would marry him if he could obtain some fresh coffee. This absolute champ met me at the last feed station with a put of fresh coffee in hand having gone to the effort of going home to collect it en-route. He made my 24hours! ... and I’m now not sure of my marital status as a result!

1/ Enjoy it - that’s why we take these adventures on right? I enjoyed RTTW way more than I ever presumed I would (even if there were times that I might not have looked like it ha ha)

3/ There will be highs and lows, know that they will arrive and accept them when they do. Be gentle on yourself (but not too gentle ... you need to press on remember). The feeling at the end is well worth any number of lows you might go through along the way. I was grinning ear to ear and so proud of my achievement - that is what you will remember, not the bit where your bottom hurt for a while.

My Exposure Strada 1200 front light lit the way and the Exposure Flare rear light gave me the confidence to continue through the darkest of hours. Decent lights are an absolute must and I swear by Exposure.

Think of your feet - you will be on them for a long time and in my experience this is the part that will suffer the most. Comfy shoes and thin socks - strange but true.

I used a Canyon Aeroad with 62ml deep section wheels. Arguably not the right bike for an event of this kind through a series of hiccups this was the first time I had actually ridden it, but wow it was a pleasure to ride and surprisingly comfortable over such a distance! Obviously I wouldn’t recommend approaching an event of this size in such a manner, but all credit to Canyon the bike felt comfortable and problem free throughout.