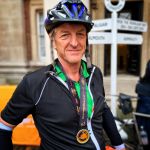 Having had a long event abroad cancelled, I was looking for something to do in the UK and was attracted by the idea of the Trafalgar Way and its story. Also, it was the longest ride I could find, and I’ve never been to Falmouth.

When I have done so, which I have quite often, I usually tell the historical story first – “The French are defeated, but Nelson is no more…” and then I ask them if they happen to remember the – torrential…? biblical…? - weather on the last weekend in September 2019. I was nearly blown off my bike several times above Chesil Beach.

Being soaked to the skin at around midnight as we passed through villages in Dorset I knew as a child.

It’s a long way, so settle into an honest and steady pace and the keep pressure up.

More time is wasted faffing around in checkpoints than you would ever believe. Work out what you need to do and stick to the plan – even if means allowing yourself to switch off for five minutes, or have a pint in Abbotsbury. Just remember to switch back on again.

Make sure you have tested food and particularly gels and drinks before setting out.

I’m not really the person to ask as I am not a kit bunny. I always take far too much. I rode with bike-packing rig and it gave me plenty of space for kit (my normal clothes and travelling library from the train journey down to the start).

A J.Laverack J.ack touring bike. My bike-man, the West London Goth, installed a Shimano Ultegra something without asking if I could do with an extra ring on the cassette. He obviously has no idea how hard it can be weighing 90kg…