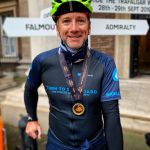 I’d already ridden 200, 300 & 400km during Audax rides and the inaugural Trafalgar Way Audax was a natural next step. The history of the route also appealed to me having spent 13 years in the Royal Navy. The charity I ride for is also based in Falmouth, Turn to Starboard so it gave me the opportunity to meet the team also….it’s almost like I was destined to ride it.

It was epic on many levels. The scenery, the roads, the people, the weather and not forgetting the organisation. Having rode it in those conditions and completed it I believe I’m capable of anything!

The lady in the Texaco garage at Burton Bradstock. The Costa machine was out of order so she made me a coffee and told me to help myself to anything I wanted from the hot food counter as she was throwing it away. The weather was horrendous previous to that stop and it boosted my spirits to make it to The Swan in Abbotsbury where I met up with James, Ash & Andi with whom I completed the ride.

1) Complete at least a hilly 300km first. It’s quite lumpy and I think it surprised some riders including me.

2) Check the weather and pack accordingly. If it’s going to be nasty pack kit as food is available all along the route.

3) Remember 1mph is better than 0mph & never give up during the night - things are always better when the sun comes up.

Otter socks - I didn’t have them for my attempt but I won’t leave home in bad weather without them.

Van Nicholas Skieron Ti. As many bike fitters have told me I should be on a rugby pitch not a bike so my gearing is Ultegra 50/34 with an 11/34 cassette which helps me on the hills.